We are back to urban Alaska, Sitka a town of almost 10000 inhabitants, after an interesting segment through Neva Strait and Olga Strait.

As we had gone through Neva Strait, a narrow but very well marked channel, we were still keeping a sharp eye on our surroundings . Dunnery noticed a small fishing boat drifting in the open area at the start of Olga strait. We first thought that they might be observing the wreck of an old tug but then Channel 16 on the VHF radio came live with a call to the white sailboat. We found out that True North’s transmission had just died and that they were drifting helplessly in the deep water being push by a current slightly above one knot. Not imminent danger, but danger about to be! We immediately started a rescue operation, came along side True North, established that all aboard were fine and decided that the best thing to do was to give them a tow to a shallow bay where they  could  drop an anchor and stop the aimless drifting. We passed along one of our bright yellow floating lines to their skipper. The line was secured from our stern to their bow and we started pulling. Of course, the load was heavy and we kept a good watch to make sure all was fine. As we were going, we had a nice chat with this couple from Sitka, pro fisherpeople and their daughter and her partner visiting from Minneapolis. We even spotted a whale splashing in the water not too far away. As we reached the bay, about 10 meters deep, they let go of the line and dropped their anchor. The day was saved.

What could have happened without Frogs there at the right time!

We coiled our line and came along side their boat one more time, this time with a bucket attached to a rope that we could swing to the other boat. In our bucket they deposited a big Coho salmon they caught earlier in the day. A most appreciated thank you gift that we will share with Mike and Paul coming into Sitka today.

I promptly filleted the fish too big to fit in our fridge and we went through Olga Strait without further incident, entered the harbour through a mammoth breakwater and tied up on Dock 3 at Eliasson basin. This is the nicest facility we have seen so far. Here for 3 nights and a little Russian time, as Sitka was the Capital of Russian Alaska before it was sold to the USA. 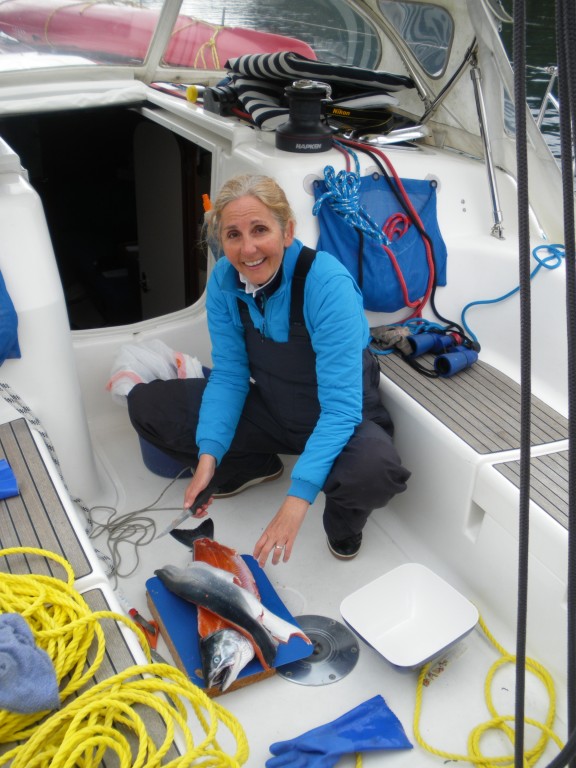 We later saw our “rescuees” in town, they had got a tow all the way from a friend with a big engine and had the boat up for repair.